A preview of the new patrol boats for Washington, Ohio and Texas

NOTorth river boatsRoseburg, Ore., delivered a 30’×10′ patrol boat to the Washington Department of Fish and Wildlife (WDFW) last August. He primarily works the waters of Puget Sound with a two-man crew.

“We are one of Washington Fish and Wildlife’s largest suppliers,” said Mike Blocher, North River Boats sales manager. “Depending on the area and the operator, they will choose the platform that suits them best.”

Thus the 30-footer operates in the relatively protected waters of Puget Sound, while a larger 38-footer that North River will soon deliver to the WDFW will work offshore.

Full throttle or idle, the crew operates from a panoramic wheelhouse that includes All Sea Saltit’s Shoxs 6300 shock attenuating seats. Inside the wheelhouse is a dinette with a small kitchen and a bathroom.

A Imtra Sleipner (side power) the bow thruster helps maneuver in tight spaces or squeeze into larger vessels. Going against larger boats explains the bumpers on the side of the hull instead of a foam or rubber collar. For salvage work, there is a davit on the after deck, as well as a ladder leading from the water above the transom.

MetalCraft Marine is currently building three patrol boats and recently delivered three more. Two of the three boats under construction will go to Lake Erie for the Ohio Department of Natural Resources (DNR), while the third will patrol from Corpus Christi, Texas, for Corpus Christi Harbor Police. The three recently delivered boats went to Pensacola, Florida, and the Coast Guard in mid-February.

The Coast Guard boats are all seven-meter (22’6″ × 8’3″) Interceptor RIBs with Wing foam collars, which “is the most popular size in the world with navies, coast guards,” said Bob Clark, contracts manager for MetalCraft Marine. The company will deliver another 15 boats to the Coast Guard this year. Some go to Alaska and others to California and Washington. 18 more will be built in 2023 and 15 in 2024.

Designated cutter-boat-large, the boats will be carried aboard Coast Guard vessels and will be used for search and rescue, drug enforcement and crew transfers. Seven-meter interceptors were chosen because they will be placed on older ships and older Coast Guard and Navy vessels designed to carry similar-sized boats. Additionally, the ship’s davits were built for the 4,300 lbs. weight of a seven meter boat.

The new RIBs are powered by a single VolvoPenta Diesel D-3, paired with a biprop engine designed to give RIBs a top speed of 38 knots. Shox’s shock-mitigating suspension seats should make riding at this speed much easier for the crew.

Weight was also a factor in choosing Volvo engines, “because Volvo is lighter. Cummins weighs so much more,” Clark said. Although “the Navy uses Cummins diesels in all of its seven-meter RIBs”. 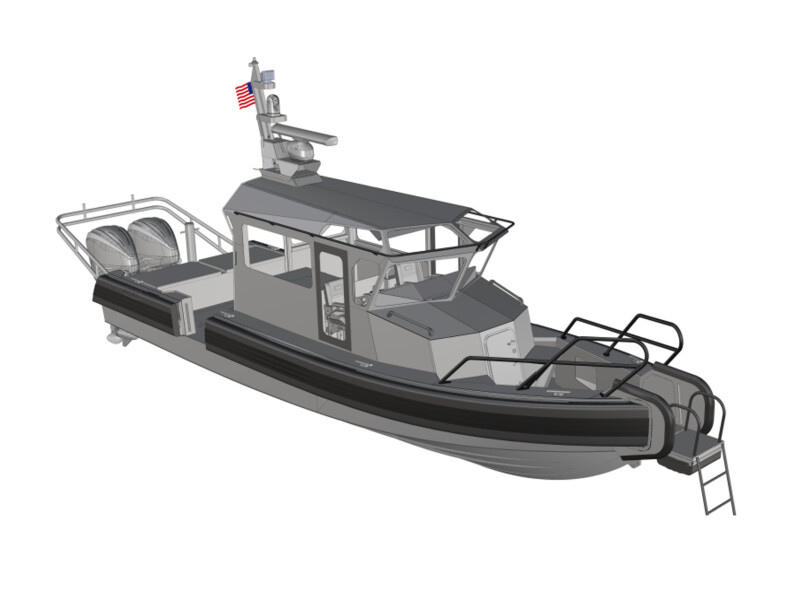 The two boats heading to Lake Erie for the Ohio DNR are an eight-meter (26’6″×8’5.5″) Interceptor and a 10-meter (34’×9’10”) Interceptor. primary mission will be patrol and search and rescue work and, as required, support to US Customs and Border Protection, Coast Guard, and municipal operations.

Clark described Lake Erie as “the most restless body of water in the Great Lakes. Possibly one of the roughest bodies of water in North America, with the deepest part only 100 feet, most at 30 feet. With a fair amount of wind this could create some very choppy and uncomfortable passages.

“It’s the shape of the hull, and then the seats,” Clark said, that keep the crew comfortable in the worst of situations. He describes the eight-metre hull “as really strong, heavy and with a very nice bow entry”. While developing the hull, MetalCraft put the design through 18 design iterations. Then, after the construction of the first hull, the design was changed once more, mainly in the width of the chine. The final shape of the hull, plus two bulkhead-mounted Shoxs suspension seats, should give the patroller the edge when looking for the bad guys.

In fact, if you’re one of the villains Ohio DNR is looking for, you better have efficient hulls and plenty of horsepower because both DNR boats will be powered by Yamaha outboards capable of reaching speeds peak speed of around 50 knots. The eight-metre Interceptor will have a pair of 300hp Yamaha outboards, while the larger 10-metre Interceptor will reach 50 knots with two 425hp outboards.

One feature of Lake Erie boats that Clark calls “a revolutionary change for hardtails” is the forward ramp. MetalCraft puts them in landing craft “but in high-performance RIBs, it’s not done.” Still, as he points out when someone needs to get ashore, getting there via a front ramp is much easier than crawling across the bow or jumping into the water.

The two Lake Erie boats are just the start of MetalCraft’s three-year contract with Ohio DNR. “It could be over 20 boats,” Clark said. “What we’re trying to do is find the perfect boat for Lake Erie.”

The Corpus Christi Patrol Boat is 42’6″ × 13’4″, a multi-mission police and security, ship escort, and search and rescue vessel. It is also the same model that won work boat‘s Boat of the Year Award 2020 after it was built for the Port of Los Angeles Police.

The 43-footer is expected to run “long crews, 24/7,” Clark said in an email, and it “expects 2,500 to 2,800 hours of operation per year.” Power for these long patrols is provided by a pair of 600 hp Cummins 8.3L engines, matched to HamiltonJet 322 water jets through ZF marine gear which should generate 38 knots when the patrol boat is fully loaded.