“I never imagined that I would be in the same situation,” he said. “Three days later I’m home and getting calls from people saying water is coming into their homes and they need to be rescued.”

His own house began to leak.

“To be honest with you, I was in shock because I couldn’t believe water was coming into my house,” he said. “Once it reaches the electrical outlets, turn off the power. Looking back, it was a stupid thing to do, but I know I was in shock.

As her family began moving items on the second floor of the house, Sinegal began calling emergency management officials to help facilitate rescues on the high seas. And even as her grandchildren began to cry , begging him not to come out in the storm, the commissioner headed to the Central Mall area to join the rescue effort.

On Chandelle Lane, Allen Parker also started fetching water from his home on the night of August 29, 2017, so he walked across the street to his parents’ house – one of only two on the road that was not flooded. But soon after, a friend called and said they had water in their house and they couldn’t get out.

So Parker launched his 20-foot-long fiberglass fishing boat in his residential neighborhood.

But as he walked towards Blackberry Lane, he could hear the others shouting.

“Every trip there someone was screaming for help,” Parker said. “One of them was a whole family. I think there were 12 people in my boat.

From about 9 p.m. to 4 a.m., even as the rain continued to fall and the water continued to rise, he drove his boat through the streets of Port Arthur to carry out rescues.

Sinegal was helping put people into dump trucks to move them to safety. 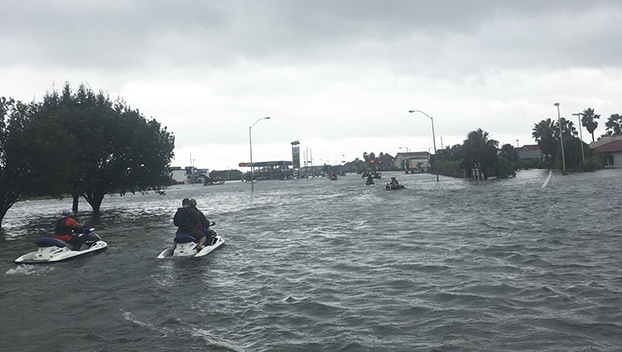 “All we could do was get them to the heights,” he said.

“We were preparing for a tidal wave. With hurricanes, the only thing we worried about was the tidal wave. But it was a rainy event that took a lot of people by surprise.

When Parker got home, he slept for about two hours and his wife posted on social media to find anyone in need of rescue. At 6 a.m. he was back in his boat, but this time in much higher water.

“Above Turtle Creek – it was one of the worst neighborhoods, Turtle Creek Drive and 9th Avenue. It was above the cars,” he said.

“You could drive your boat at 20 miles an hour and it was like nothing. The only thing to be careful of was getting close to mailboxes and fire hydrants, because you didn’t know not always where the street was.

Sinegal recalled seeing water on rooftops and said he thanked God there were no more deaths as a result of the storm.

But he still feels a personal loss. As they moved what they could to the second floor of his house, a box of photographs was left behind. He lost almost all the photos of his mother, who died the following June.

“I hope and pray that this never happens again,” he said.

“If someone had told me I could take a boat from 39th Street to Thomas Boulevard in Port Arthur, I would have told them it was a lie. I could write a book about that night because it was so scary.