Understanding what makes the best sport fishing boats requires understanding both the use and purpose of these specialty yachts.

Bluewater sport fishing boats require an extra level of specification over a typical luxury yacht, and for good reason. The Billfish tournament or competition is a big budget sport – millions of dollars in prize money can be at stake during a 3 day event.

The best captains and the best sport fishing boats compete at the highest level in very difficult conditions. The White Marlin event, with its top prize of $1 million, welcomes over 400 boats seeking a share of the total purse of $9 million.

These events also provide the winner with massive sponsorship offers and all the prestige that comes with it. Top captains receive huge salaries and bonuses from owners to compete in a circuit of over 30 top-tier events in the United States alone.

Tournament level boats typically cruise at speeds in excess of 35 knots and in some cases well over 50 knots. Competing in 8ft seas is not uncommon and a range of at least 300 miles at high cruising speeds is required just to compete. The latest and greatest navigation, sonar, and ship systems, along with massive power, are needed at this level to gain any kind of advantage.

The largest sport fishing yacht in the world is bad companywhich was built by Trinity Yachts and launched in 1998. At 144ft LOA, weighing 238 tons and still capable of a top speed of 25 knots, this yacht sits quite at the end of the spectrum.

bad company will soon be eclipsed by the 171ft Project 406, which is currently under construction at Dutch yard Royal Huisman and is due to launch next year.

A typical competition sport fishing boat is between 50 and 75 feet long and costs from $2.5 million. Sportfish boats generally operate on a hull and deck style proven for decades that has remained largely unchanged for over 40 years. 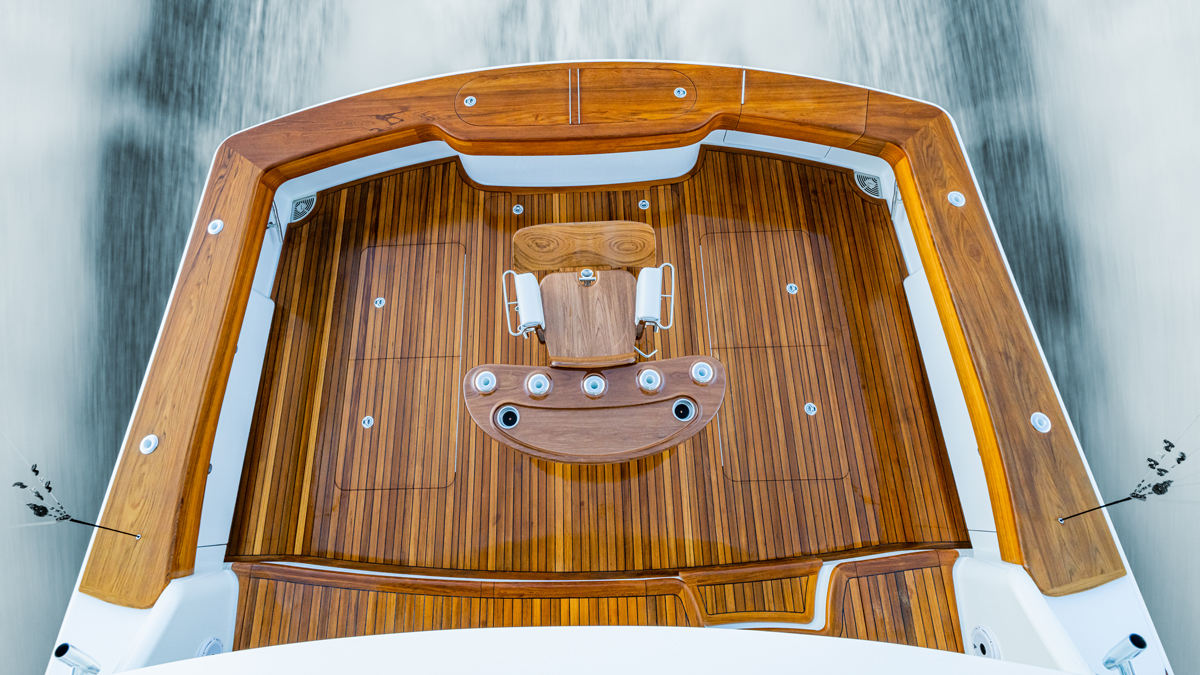 That said, some of the best center console boats for fishing more frequently bring competitors with a significantly smaller budget into big purse tournaments.

Technology has taken leaps and bounds over the past decade – the recipe for a tournament boat requires large working spaces, the ability to travel huge distances at high speeds in harsh conditions, massive storage and the ability to put as many lines in the water as possible.

In no particular order, here are some of the best sport fishing boats available today:

5 of the Best Sport Fishing Boats

Launched in 2021, the Viking 64 Convertible saw several technological upgrades to this premier powerhouse. Extensive use of carbon fiber in addition to traditional resin infused hull construction sets the standard for the next generation of Viking sport fishing boats.

A new horizontal grain walnut option is available inside. Plus, the Viking 64’s new helm, based on Viking’s Valhalla line of center consoles, is nothing short of a masterpiece. 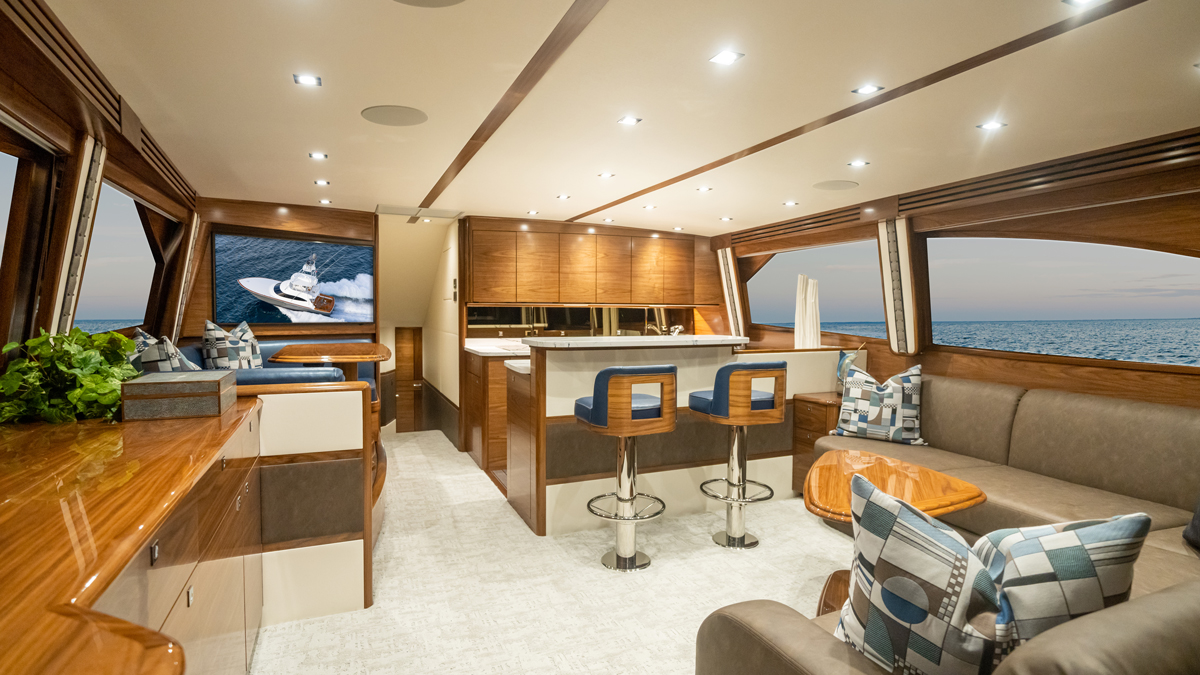 Featuring amenities including a through-hull omnidirectional sonar array and a Seakeeper gyro stabilizer, the Viking 64 is the new benchmark in luxury tournament boats. 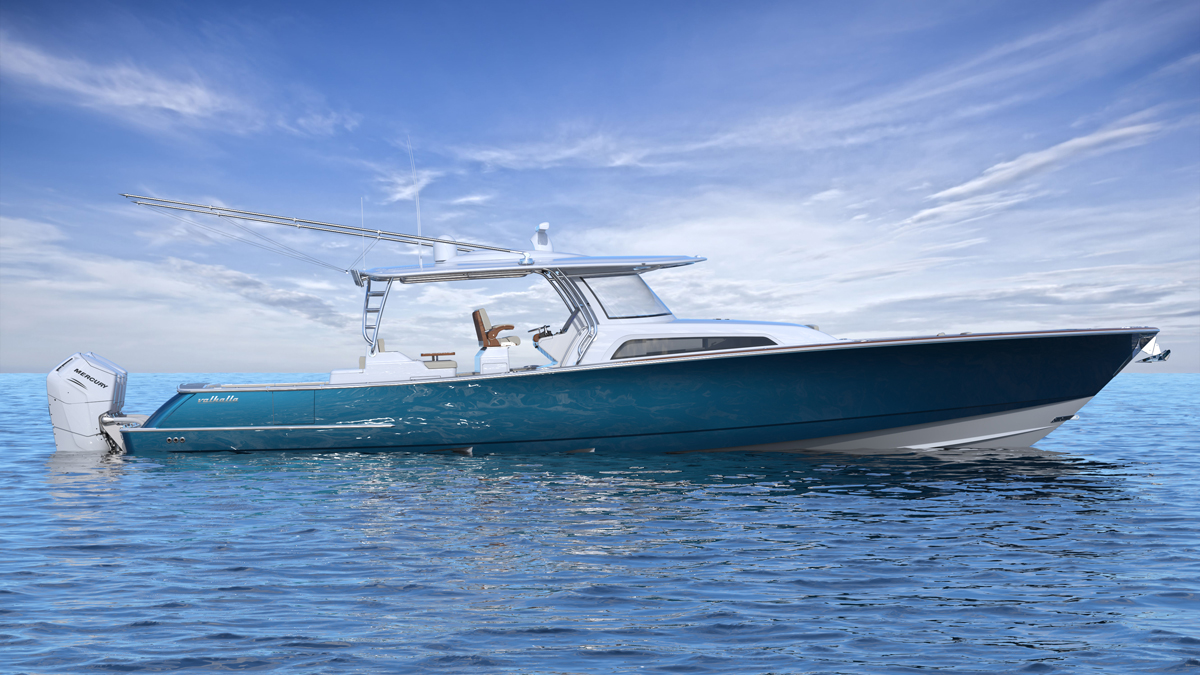 Its two-tier deep-V hull with vented channels not only offers exceptional speed, but also significant efficiency improvements over a standard deep-V hull.

At 15ft 6in on the beam, the Valhalla 55 will be the widest center console in the sub-60ft bracket. The ability to carry up to 1,200 US gal (4,542 L) of fuel should also give the 55 a significant range advantage over its competitors. 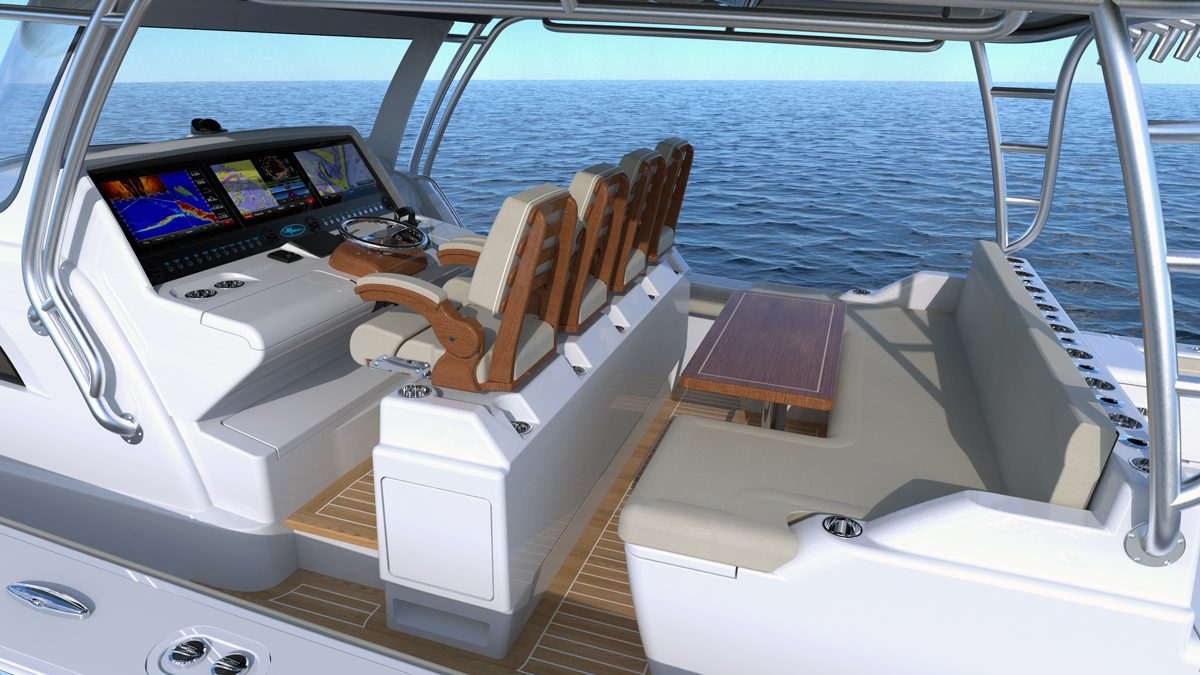 The accommodation can accommodate up to four people in its luxurious cabin. Prices start at $2,945,000 for a 600hp quad boat, but that doesn’t include the optional Seakeeper 9 outriggers or the massive 27-foot carbon fiber outriggers. 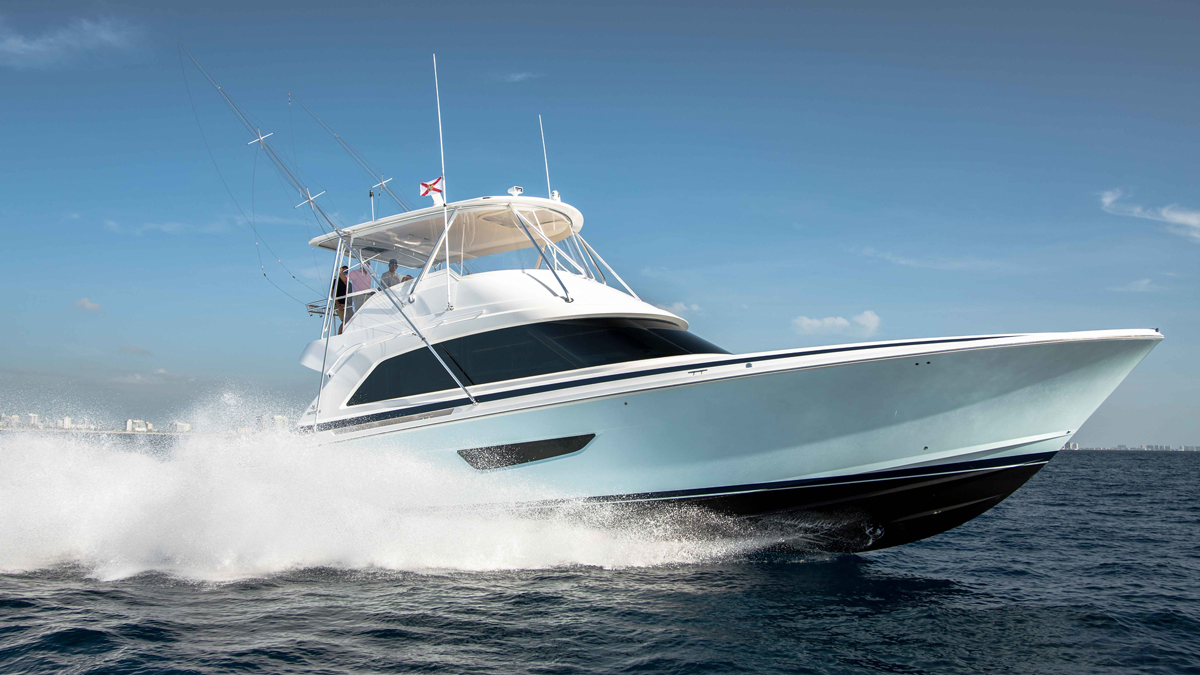 The Bertram 61 is an evolution of what could be considered the first high performance sport fishing boat, the 1980 54 foot Bertram. The design follows the classic style with its huge flared bow and long flush foredeck.

Although not as state-of-the-art in her hull construction as the Viking 64, the Bertram is still a real contender, and with a base price of $3.5 million, she is a good $2.5 million cheaper. 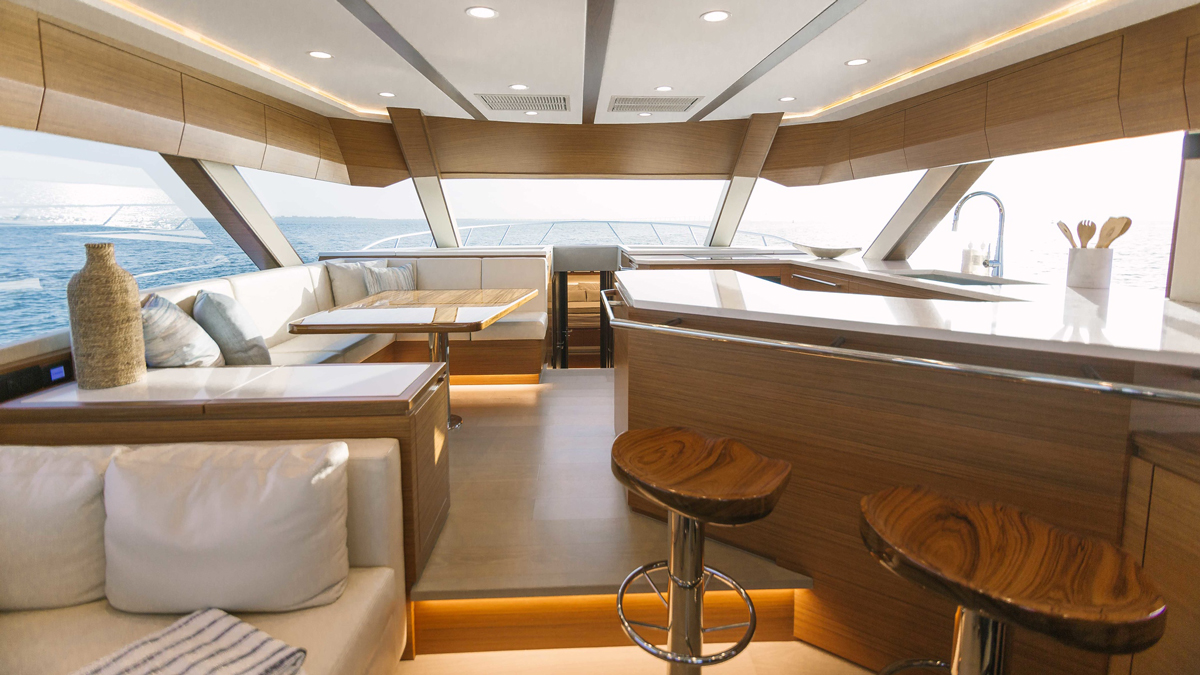 The Bertram is also slightly more comfort-focused than the Viking, with a full-beam owner’s suite and a three-cabin layout. The Bertram can be ordered as a race-ready boat, operating with an impressive fast cruise speed of 37 knots and peaking at 43.3 knots when powered by two 1,925 hp CAT C32As.

With state-of-the-art sonar, a host of navigation options, a Seakeeper gyro and digital anchor (a $90,000 option that allows the Bertram to latch onto a set GPS point), plus a wealth of tournament-level extras, the 18ft 3in wide Bertram, with its huge 188sq ft aft cockpit, is a highly competitive sport fishing boat at all levels. 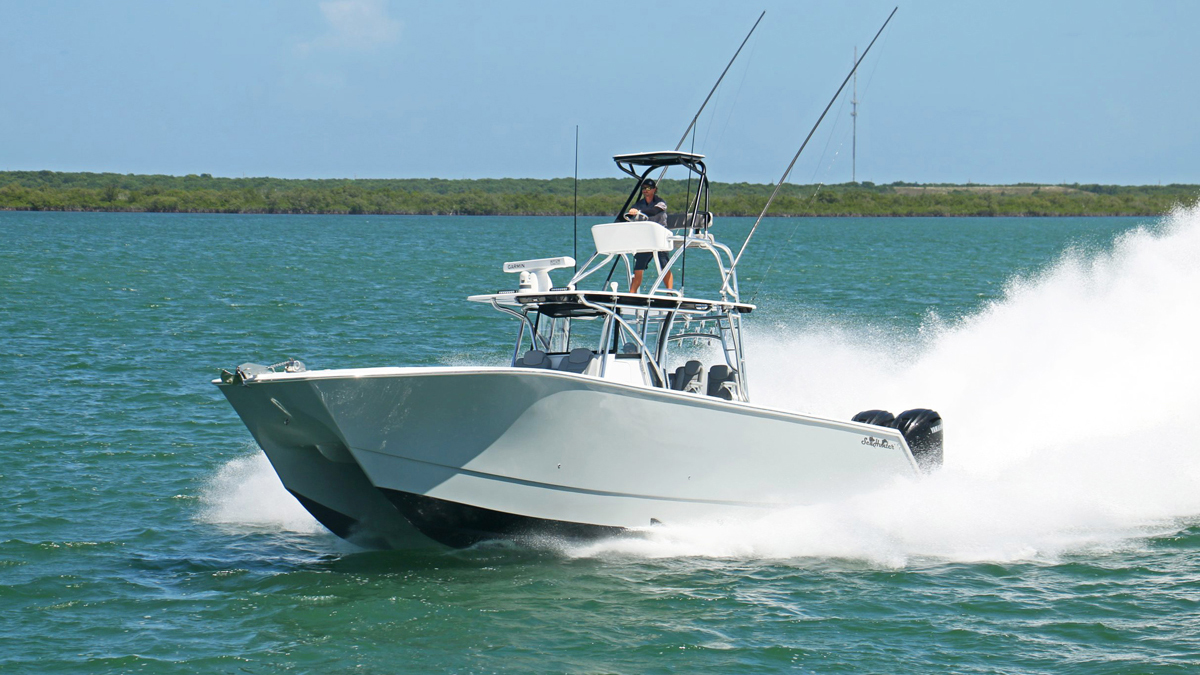 At 46ft LOA and a whopping 12ft 4in on the beam, the SeaHunter CTS 46 catamaran offers huge deck workspace for a sport fishing boat of this size. It is now available with up to 4 x 600 hp Mercury V12 – unprecedented power in this size class.

Her twin hulls allow for an arsenal of fish boxes, bait wells, rod storage and rod holders. With carbon stabilizers, this boat is capable of going into battle as well armed as an Abrahams tank.

The incredible seakeeping arguably makes them a whole new breed of sport fishing boat. With a fuel capacity of 800 US gal (3,028 L), the Sea Hunter has an effective range of over 400 miles at her cruising speed of 39 knots and a top speed of over 60 knots with outboard engines. edge Mercury Racing quad of 450 hp. 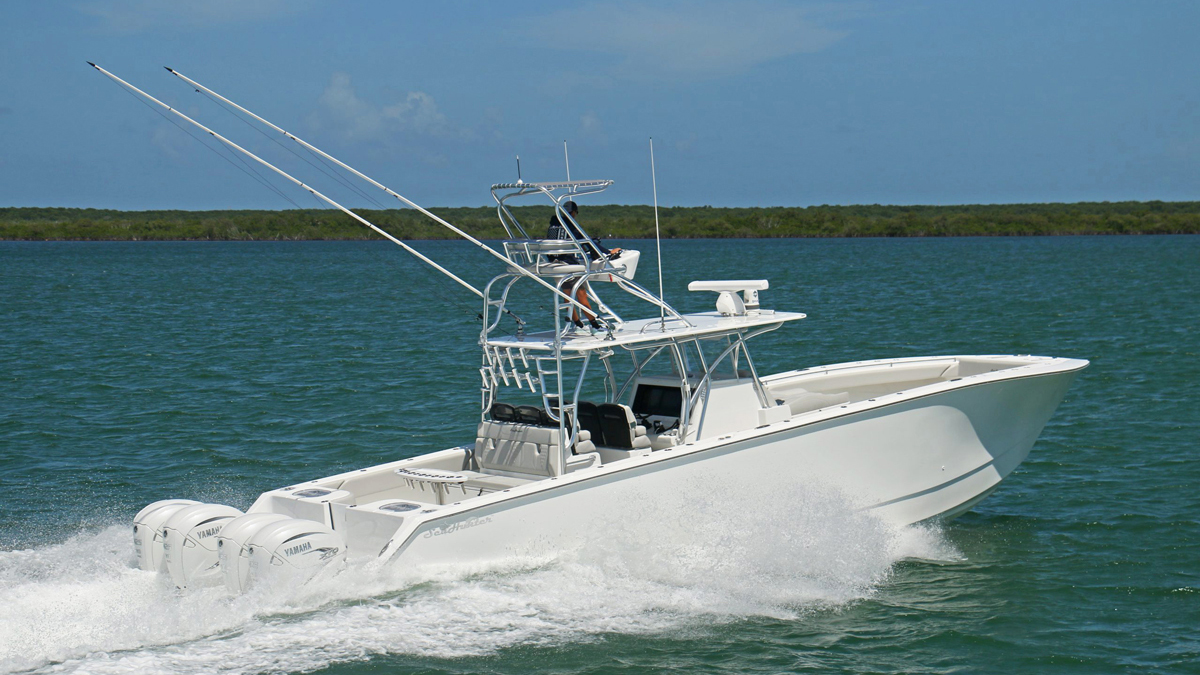 The catamaran’s deck configuration also allows for a large mid-mounted aft tuna hatch between the engines, making it much easier than competing outboard motor sport fishing boats to back up on huge fish and to shorten the fight.

Although limited in overnight accommodations, with a Seakeeper gyro and a significant performance advantage over conventional sportfishing boats, the carbon-fiber-hulled Seahunter can extend its fishing time beyond that of a boat. a typical sport fishing boat due to its superior reach.

You can expect to pay over a million dollars for a competition boat, depending on engine configuration and options. Make no mistake, the Sea Hunter CTS 46 is a strong contender. 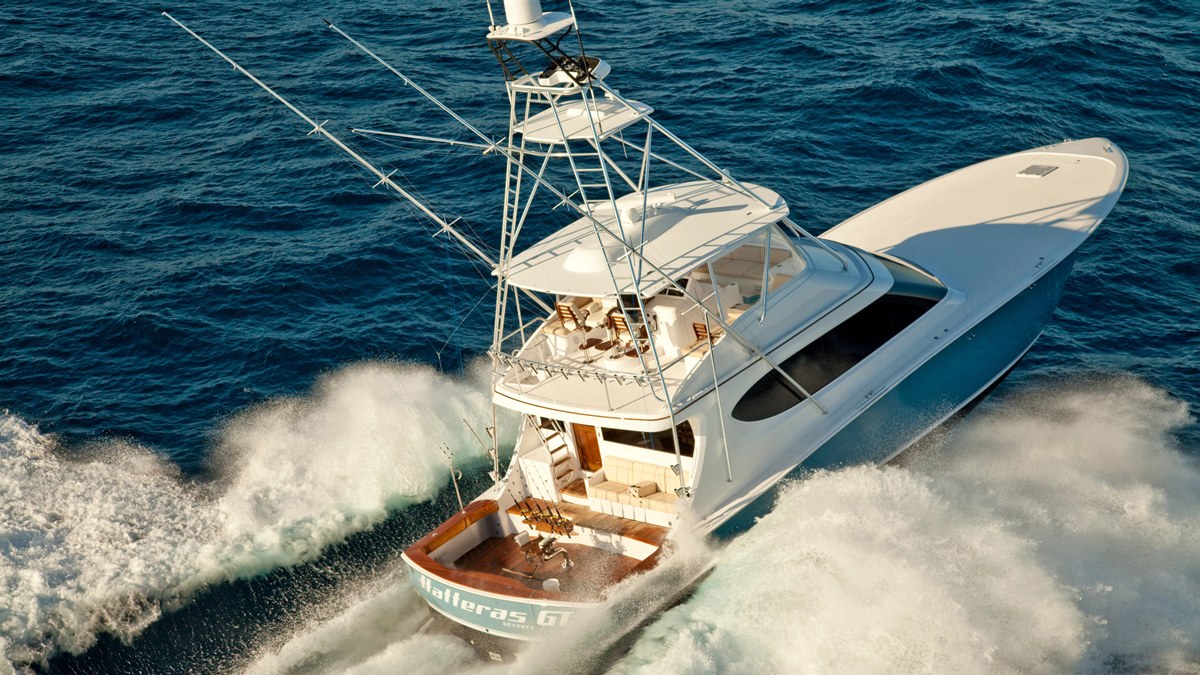 A veteran of the Billfish tournament scene, Hatteras has been producing tournament sport fishing boats for over four decades. The GT70 follows the classic Hatteras formula with a long, flat foredeck, massive Carolina flared bow and huge amounts of square footage in the rear.

The layout of the GT70 is very traditional and proven on countless tournament yachts, with two helms on the flybridge and at the very top of the tuna tower. Hatteras adopted a pod-style center helm with side-by-side seating, allowing for a full flybridge and unobstructed views across four 19-inch flatscreens.

Power furlers are integrated into the massive hardtop and spacious port, starboard and forward wrap-around seats with integrated air conditioning complete the commanding deck. The entire deck can be surrounded by isinglass panels and heated or air-conditioned as required.

The interior of the yacht is also based on the age-old formula of a central companionway on the lower level to allow easy access through the boat in rough water. 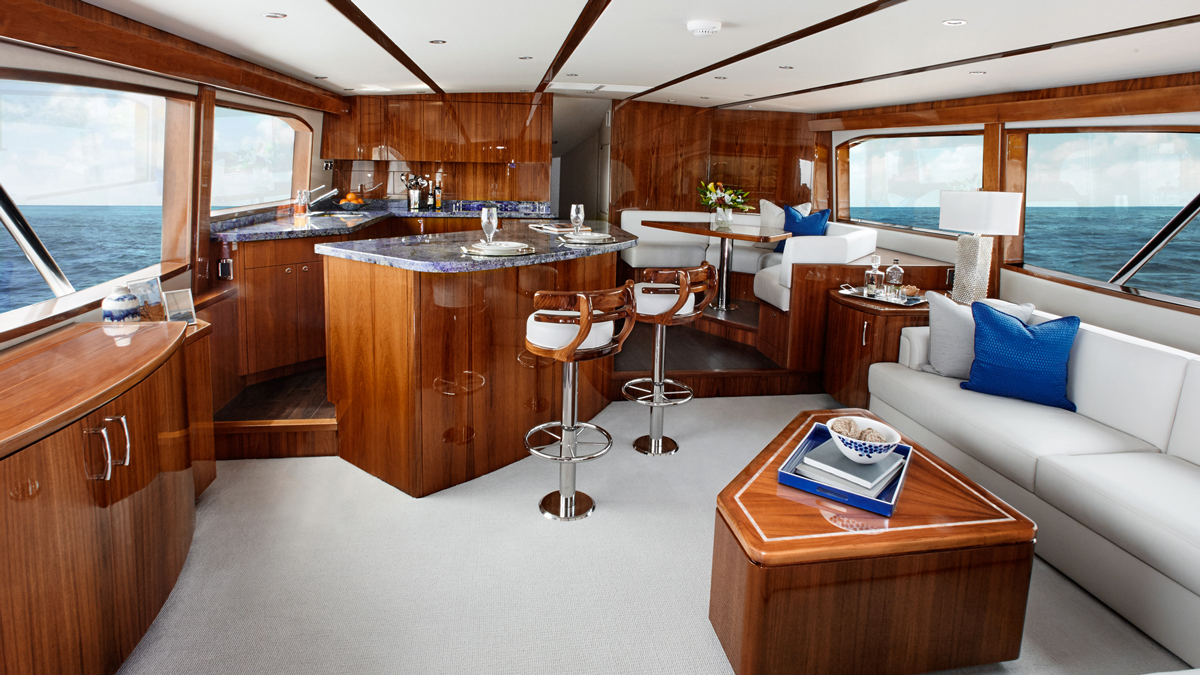 The five-cabin, four-head layout can be adapted with two cabins carried away for workshop and rod storage if required. Meanwhile, the master cabins are located in the half-beam amidships and forward.

Hatteras builds a lavish yet practical interior, with a huge wraparound galley forward on the main deck to port and a large C-shaped dining area to starboard.

But don’t let all that luxury fool you – the Hatteras GT70 was designed to perform in blue water conditions. With the two optional 2600hp MTU M96 diesel engines, this 70ft powerhouse can exceed 40 knots, burning 160 GPH at a fast cruising speed of 30.5 knots. Given a fuel capacity of 2,140 US gal (8,101 L), you’re looking at an effective range of over 400 miles.

Starting at just under $5 million, the Hatteras GT70 is a compelling tournament sport fishing boat with decades of tournament craftsmanship baked into its DNA.

If you enjoyed this…

Be the first to hear about the latest boats, gadgets, cruising ideas, buying tips and reader adventures with a subscription to Motor boat and yachting. Available in print and digital format, our monthly magazine will be delivered directly to your home or device at a substantial discount from the regular cover price. See our latest offers and save at least 30% on the sale price.